Three Bills on agriculture reforms were introduced in Parliament on Tuesday to replace the ordinances issued during the lockdown. Opposition parties and farmers groups are opposing the move to enact amendments to the Essential Commodities Act, new laws to bypass the state APMC Acts and to facilitate contract farming. 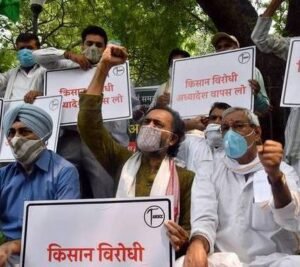 The Centre introduced the three Bills on food and agriculture reform in the Lok Sabha on Monday, amidst vehement protest from the Opposition parties and the farmers groups. The proposed legislations will replace the ordinances promulgated during the lockdown and will bring about changes to the marketing and storage of farm produce and agri commodities outside registered markets, as well as the facilitation of contract farming.

Introducing The Farmers’ Produce Trade and Commerce (Promotion and Facilitation) Bill, and The Farmers Empowerment and Protection Agreement on Price Assurance and Farm Services Bill, Agriculture Minister Narendra Singh Tomar said the new laws would benefit farmers by empowering them to decide the price of their produce, which was earlier determined by traders. It would also encourage private investments and technology introduction in the sector, he said.

Congress MPs Adhir Ranjan Chowdhury and Gaurav Gogoi opposed the Bills, accusing the Centre of grabbing the rights of farmers and handing it over to corporates, adding that the States were not consulted. “It is beyond the legislative competence of this House to enact any law on agriculture, which is a domain of the State governments,” said Congress MP Shashi Tharoor. Trinamool Congress MP Saugata Roy called them ‘draconian’ and “anti-farmer” legislations while Mr. Gogoi claimed the government was deliberately undermining the Minimum Support Price regime.

Mr. Tomar reassured the House that the MSP would stay but added that the majority of farmers are small and marginal and do not see benefits from it. He called the legislations a “game-changer” for small farmers.

Minister of State for Consumer Affairs Raosaheb Danve introduced the amendment to the Essential Commodities Act, noting that the ordinance was introduced after recommendation from a high-powered panel including six Chief Ministers. Mr. Gogoi said the Bill would only increase hoarding while Mr. Chowdhury said it was against the principles of cooperative federalism.

Farmers groups held protests across the country, including one at Jantar Mantar near Parliament Street as well as 1,500 mini protests in Punjab, Haryana and Uttar Pradesh, demanding the withdrawal of all three legislations. These laws are “designed to save the crisis-ridden big corporates and help them to squeeze profits from the only sector showing some growth in the midst of the pandemic”, said V.M. Singh, convenor of the All India Kisan Sangharsh Coordination Committee, an umbrella platform of farmers groups.